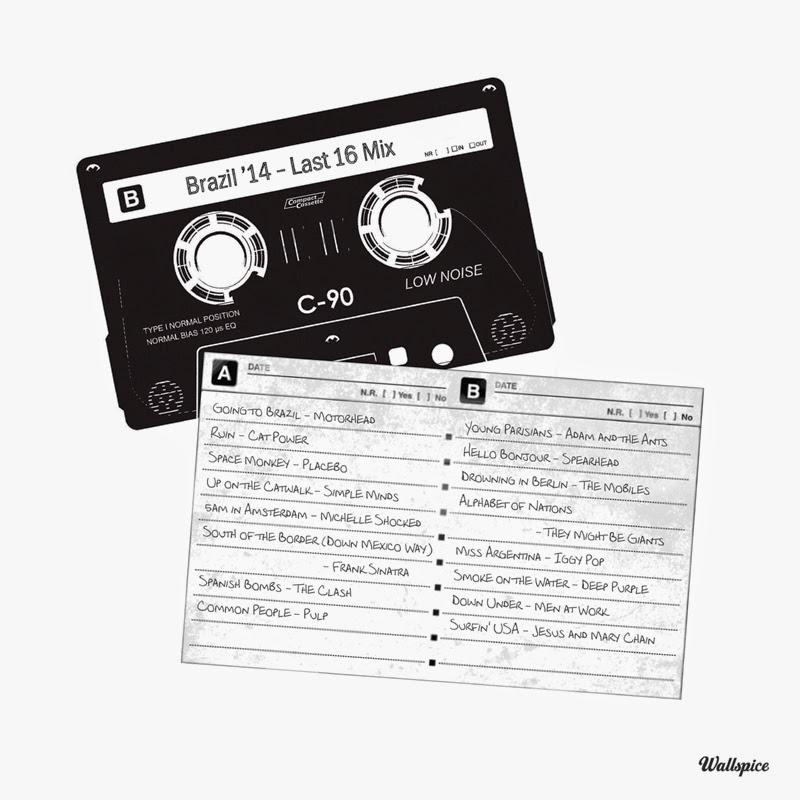 We like this World Cup mixtape wall art celebrating the start of the Group of 16 stage of the 2014 World Cup. Some of the links are a little tenuous (to say the least) and it’s lucky there is They Might Be Giants’ Alphabet of Nations to help out. While World in Motion is conspicuous by its absence, it’s always good to have an excuse to dig out Drowning in Berlin – that early 80s lost classic from The Mobiles.

The list in full (and Countries represented where it’s not too obvious): Going to Brazil – Motorhead; Ruin – Cat Power (Chile); Space Monkey – Placebo (Colombia); Up on the Catwalk – Simple Minds (Uruguay); 5am in Amsterdam – Michelle Shocked; South of the Border (Down Mexico Way) – Frank Sinatra; Spanish Bombs – The Clash (mentions Costa Rica, even though it’s the wrong one); Common People – Pulp (“she came from Greece, she had a thirst for knowledge”); Young Parisians – Adam and the Ants; Hello Bonjour – Spearhead (Nigeria); Drowning in Berlin – The Mobiles; Alphabet of Nations – They Might Be Giants (Algeria); Miss Argentina – Iggy Pop; Smoke on the Water – Deep Purple (Montreux on the Lake Geneva shoreline, Switzerland); Down Under – Men at Work (“buying bread from a man in Brussels”); Surfin’ USA – Jesus and Mary Chain.

You can create your own mixtape print like this or choose from a wide variety of other personalised typographic prints at wallspice.co.uk.

In between all of the other projects, we have also just launched our own new website selling personalised typographic wall art – Wallspice.

Born out of a couple of ideas we came up with for our own decoration and presents for loved ones, we thought that we could put our skills to good use by selling our work online as prints and canvases. We use the personalisation available through e-commerce to create unique artwork for every customer.

The shop has just gone live and we’re spreading the word through the wonders of social media. Have a look and see if there’s anything that takes your fancy…